My poem about the environmental threat of neonicotinoids, “Swallows, Common Yet Declining,” is included in the anthology Dear America: Letters of Hope, Habitat, Defiance, and Democracy, edited by Simmons Buntin, Elizabeth Dodd and Derek Sheffield. 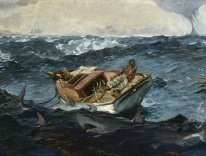 Survivor, Wreck of the Jason

He washed up on shingle, / frozen, bleary with sleet…
By Catherine Staples 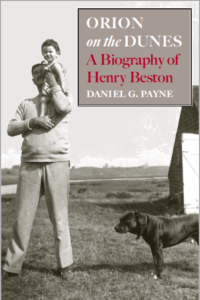 Catherine Staples’ review of Orion on the Dunes in The Massachusetts Review:

Within the protected lands of the Cape Cod National Seashore, in the small salt-box cottage we rent each summer, you step outside into a place that is simply itself. Chickadees cross above you, wind makes paths through crowns of oak and beech. The cottage—in the hold of scrub pine and sea wind—owes no small debt to writer and naturalist Henry Beston, whose magnificent book The Outermost House was one of the influences that inspired President John F. Kennedy to establish the National Seashore in 1961. Beston built his dune shack on the barrier beach at Eastham, back to the marsh, front porch opening on the Atlantic. The Outermost House chronicles the year he spent living on Cape Cod’s outer beach. His lyrical prose, naturalist’s eye, and faith in the restorative powers of the natural world for humankind mark him as a literary descendant of Ralph Waldo Emerson and Henry David Thoreau. Rachel Carson credits Beston as the only author who ever influenced her work.   …read more…

Last Run in the Batmobile
by Catherine Staples

The Rattling Window is named for a 2014 Eric Hoffer Award and selected as an Honorable Mention in the New England Poetry Club’s 2013 Shelia Margaret Motton Book Award.

Reviewed in Rattle Magazine by Margaret Holley and in Prime Number by Catherine Prescott.

Reviewed on “Love The Words,” a British Broadcast, on ELFM. Click on link to listen to the review by Julia Deakin.

Two poems featured at The Common.